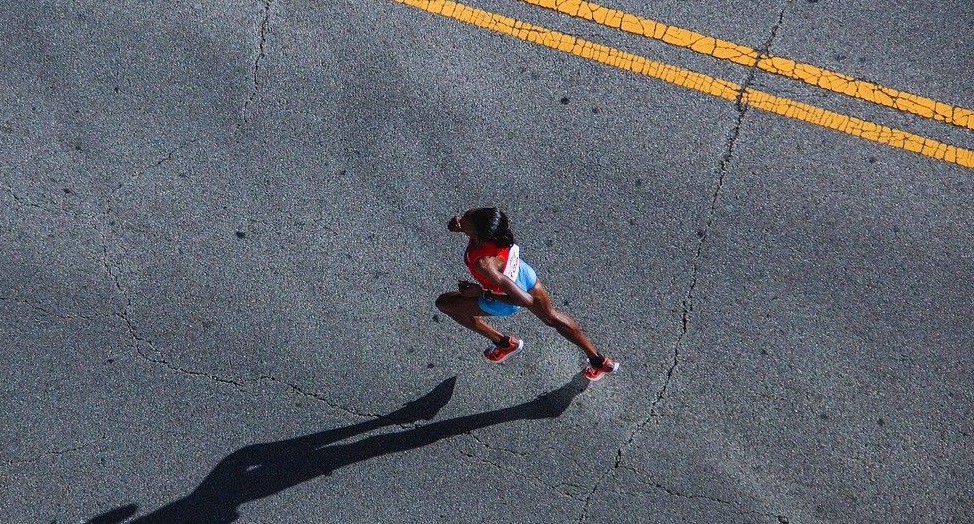 John Wooden is credited with saying, “Be quick but don’t hurry.” What does it mean exactly?

An elite runner running a marathon is moving quickly. But is she hurrying?

Someone who hurries has it written all over their movement. Hurrying typically causes you to use too much effort for the job at hand. Not exactly what an elite athlete wants. She wants to be as efficient as possible.

A few weeks back, before my YMCA temporarily closed due to the corona-virus situation, I was there for one of my twice-weekly swims. I had just finished my shower and was in the process of blow-drying my hair, when a middle-aged woman came into the locker room with her backpack. I caught sight of her in the mirror as she passed behind me and then turned into the locker bay to my right. It took only a split second for me to tell you she was late for her class. Or had a very limited time to get whatever her planned workout was in.

She was hurrying. And it was written all over her movement.

I watched her out of the corner of my eye. She was trying to move quickly. But because she was also in a hurry, all kinds of unnecessary physical effort was going into getting the stuff out of her bag, getting undressed and putting her gear on. Stuff kept falling on the floor. Stuff that she then had to take the extra time to pick up. All while the clock in her head was saying, “tick, tock, tick, tock.”

Hurrying is a symptom of a mindset. A mindset that says, I don’t have enough time. It has nothing to do with how fast or slow you’re moving.

Your mindset affects your muscles.

Thinking you have too little time is stressful. You typically react to stress with excess muscular tension. Thinking thoughts such as “I’ve plenty of time to do what I need to do right now” and “I can enjoy what I’m doing in this moment” will cause your musculature to be more at ease.

These examples are two ends of a continuum, sometimes referred to as the mind-muscle continuum. Where you tend to hang out habitually along the continuum over time will have a great impact on how you look and feel.

Always lacking enough time is typically more of a mindset than reality. But since you create the stress of rushing by how you think you can change it.

If you want to be more comfortable in your body and move more efficiently, pay some attention to what you’re thinking. Especially how you’re thinking regarding time.

Last October at the Twin Cities Tap Festival I went to the Friday evening professional show. I’ve been studying tap dancing for 20 years and seen a lot of good tap dancers in that time. Some of them, you never forget. That night there was one woman who I just couldn’t take my eyes off. Her name is Jeannie Hill. I’d never heard of her before. She teaches tap at the University of Wisconsin Stevens Point. If you ever have a chance to see her dance, don’t miss it.

Jeannie did several numbers that night, but she was never hurrying. Even when the number called for incredibly fast feet—she wasn’t hurrying. Was she moving quickly? You bet. But because she wasn’t hurrying it was as if each sound was given its proper space. You might call it being completely present with what she was doing. Not getting ahead of herself. It was beautiful to watch.

If you often find yourself doing things with what seems to be unnecessary amounts of tension and you can’t figure out how to just relax more, check in to see how you’re thinking about what you’re doing. Are you focused on the task at hand? Or are you thinking you need to get this current task done so you can get on to the next one? If you find you’re thinking the later, consciously refocus your thoughts on the task at hand and tell yourself I have time.

This is a simple suggestion but not necessarily easy to implement—especially if you’ve a lifelong habit of rushing. But it’s worth trying. Your body will thank you for it—and you just might enjoy that workout a little bit more.

Image by Pexels from Pixabay

4 Replies to “How to Harness Your Mind-Muscle Connection”